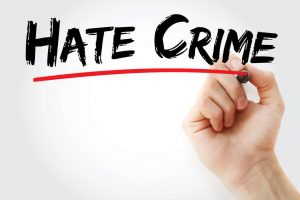 The phrase “hate crime” is frequently encountered these days in the news and on social media. Hate crime rates are on the increase in the United States, especially in Colorado. But what exactly is a hate crime and what happens if someone is accused?

What is a Hate Crime?

Assaulting two people inside a car then shouting racial slurs.

Finding a swastika spray-painted outside a synagogue.

Racial discrimination and harassment against Asians during the pandemic.

These are just some of the actual examples of hate crime that happened in Colorado.

A hate crime can be defined as a crime targeting a victim because of that person’s identity: racial group, religion, nationality, gender identity, disability, ethnicity, age, or political affiliation. A criminal act becomes a hate crime when the victim’s identity is a motivation behind the committed crime.

2. Bias-motivated crimes (C.R.S. 18-9-121) – against property or to cause bodily injury occur if the perpetrator

a) Knowingly causes bodily injury to another person; or

c) Knowingly causes damage to or destruction of the property of another person.

What can happen if you or someone you know is accused of hate crime?

Assault and harassment are charges that can result in very high fines, long prison sentences, and a criminal record of violent crime should you be convicted.

However, if the prosecution determines that the assault was motivated by the victim’s perceived identity, it may also be considered as a hate crime which can make your current penalties and charges even worse. A hate crime enhancement means that your case will be more sensitive and on a higher profile.

It can also be possible that prosecutors can incorrectly consider a crime to be a hate crime, especially when the victim is of a different race, ethnicity, sexual orientation or religion. It is easy to jump into conclusion that an act of hatred on this situation automatically makes this a hate crime. To successfully convict you for hate crime, prosecutors must prove that the intentions behind your actions were motivated by the victim’s identity.

What to do when accused of hate crime?

If you or someone is arrested for a hate crime, the first thing that should be done is to contact a bail bonds company in Colorado. Making use of bail bond services can help you get released quicker, and can offer you flexible and affordable payment terms for your bail. Due to the increasing cases of hate crimes in Colorado, bail bonds services would be a smart choice due to their day-to-day experience on this matter.

Looking for a good and reputable company for availing bail bonds in Colorado? Lucky Lucero’s Bail Bonds is a family-owned and operated bonding company that has been in business since 1982. Contact us and get a free quote!